Myofascial Distraction using Cupping Techniques is directed at the muscular and fascial systems of the body. This form of therapy uses mechanical suction equipment to create the required vacuum (negative pressure) with cups. A cup is attached to a hand-operated suction pump, and this cup is applied to the skin along the planes of the muscle. The cups are attached to reduce the muscle and soft tissue slack. The patient is then instructed to move in various patterns (PNF, functional movement patterns, sports-related) to allow the soft tissue to be mobilized or stretched in the desired direction. Typically, there is minimal bruising that dissipates in a few days. Myofascial cupping attracts blood to the affected area, bringing the essential nutrients to assist in healing. The negative pressure exerted by the suction of the cup gently increases flexibility in the tissues. MFD is used to relieve any injuries received when playing sports. Patients with muscle and fascial structure conditions will find this therapy very effective. Ailments like back and neck pain, sprained muscles, strained tissues and other such problems can be alleviated with the use of myofascial cupping.

Cupping therapy may be the in thing now, but it’s not anything new. It was used by the ancient Middle Eastern, Chinese and Egyptian cultures. Cupping is an ancient form of alternative medicine where cups are put on the skin to create suction. In a way, these cultures were ahead of their time. Today, it’s used to help with relaxation, blood flow, pain, and inflammation. Some think of it as a deep-tissue massage. 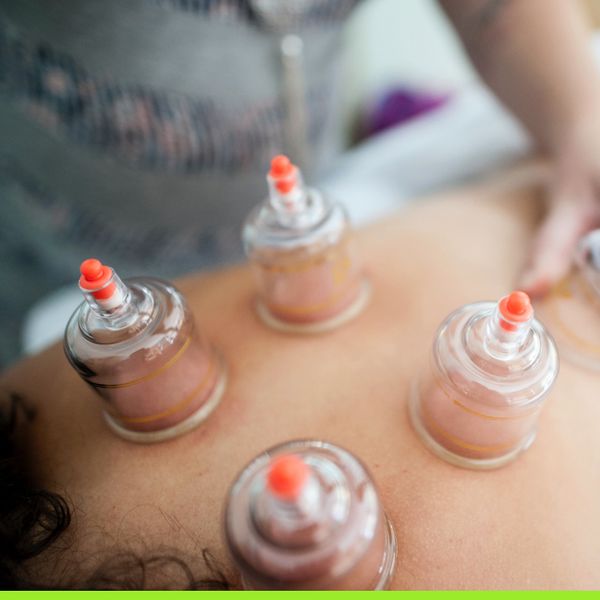 WHY CUPPING THERAPY IS DONE

Physical therapists may sometimes use cupping as a technique of tissue distraction release. The cups are glided across different areas to lift and separate tissue. It enhances the release of the interfaces between the neural tissues, fascia, skin, ligaments, muscles, and tendons. Some patients with myofascial pain report resolution of pain after just one session. There is also some evidence to suggest that cupping techniques are effective for chronic neck pain and lower back pain. It has also been shown to relax muscles, release trigger points, improve lymphatic flow, increase local circulation and release scar tissue adhesion.

Cupping therapy is popular among athletes. Numerous athletes from the Olympics in Rio 2016 used cupping. An athlete patient with over a year history of the iliotibial band (ITB) pain reported instant relief following a three-minute session of cupping. The technique was repeated a week later. He was symptom-free and returned to his usual running after only two cupping sessions. What can we learn? Cupping therapy may potentially be more effective than techniques that focus on further compressing down on soft tissues that are hypothesized to be tight.

There’s real science behind cupping therapy. By creating suction with negative pressure, it can increase hydration and blood to body tissues, ease up adhesions, rid excess fluids and eliminate connective tissues. It’s a versatile treatment and can be modified from deep tissue release to lymphatic drainage. This modality is sometimes used in physical therapy and medical massage.

Cupping should not be performed on skin sites with wounds, infection, burns or active inflammation. Sometimes, it can create bruises on the skin that can last up to two weeks. Bruises typically resolve themselves with time.

OTHER BENEFITS OF CUPPING

Cupping can boost skin health, help with respiratory issues and improve digestion. It’s been used to speed up recovery from the flu and common colds by improving immunity. It also reduces symptoms from disorders like irritable bowel syndrome (IBS).

Would you like to know more about cupping? Contact us at Mesa, AZ center and assess whether or not you’re a good candidate for cupping therapy. It’s not for everybody. Our skilled physical therapists will do a full assessment of your condition and needs.

I found Courtney and the cupping offered was just what I needed! It felt like an almost instantaneous fix. He helped me learn stretches and exercises to strengthen my shoulders for long-term results. My tendinitis has gotten a lot better but I still go in for cupping before meets or during heavy training. It keeps my muscles loose and keeps them from straining or tearing. All in all, Courtney has helped me out a lot in my athletic career.

I was refereed to PR Lab by a friend. I came here on two different occasions to seek treatment 1) grade 2 lateral sprained ankle and 2) lower back strain muscle. Dr. Courtney Warren and Wendy were very thought with the treatment for both of these injuries. I was able to make a fast recovery and go back to my regular activities due to dry needling and cupping therapy. I highly recommend this place to anyone who seeks physical therapy or overall treatment for range of motion.